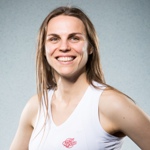 Sophie started as a simple participant when she arrived in Belgium from her native France in 2009 and became a host a semester later for Mònica’s wonderful dance sessions. In 2011 then she became a jympa instructor. She volunteers so as to keep doing jympa – something that she had discovered in Paris (at the so-called “gym suédoise”), but also to meet people outside academic circles whilst back then still studying. She enjoys the cosmopolitan aura, the nice and fun atmosphere, the sporty challenge and the possibility to “youhou” while working out ð together with many other things that it would be too long to enumerate.